Day two at CiscoLive! was so much better than expected. We had a lot of return visitors and everyone is spending more time with us today. I’m chalking that up to the super fun LogZillians who are covering the booth and not the fidget spinners we’re giving away. Interesting thing about cool booth swag; it brings in other vendors who are interested in what we do, so being able to network (pun intended), has been priceless. Talking with so many people that do NetOps daily has given me a new perspective on how important LogZilla is in this space. It blows my mind that so many companies are logging data but can’t or don’t use it…but they want to. I wish there were a way to share some of the reactions I got today after demoing our platform. I had a similar reaction this morning after I saw a competitor talk to a customer while playing with our LogZilla spinner.

CiscoLive! is an awesome place because adults are applauded when they let their inner child out, even just a little bit. CiscoLive! attendees and vendors sometime tend to be competitive and, just outside our booth, we noticed someone playing Spinner Wars with ours and another vendor’s spinner, here’s what happened: 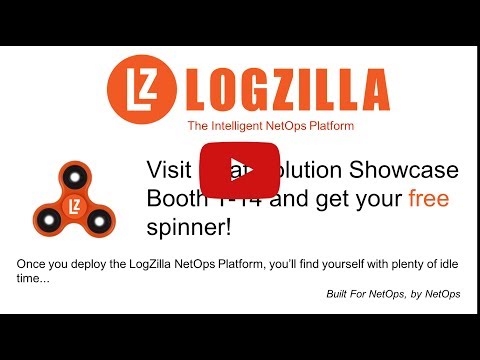 If you’re at CiscoLive! this week, stop by the Solutions Showcase booth T14 (next to the Brew House) and say hello…and try to talk me out of one of these strangely addictive spinners! We’re also giving away a second spinner if you post something nice about us on Twitter! (be sure to mention @logzilla and #clus).

LogZilla is built by NetOps, for NetOps.

Did you miss our last webinar?