A T-Rex, CiscoLive, and Bruno Mars

Ever seen a T-Rex run?

A T-Rex, CiscoLive, and Bruno Mars

T-Rex’s Are People Too!

Day 3 at CiscoLive! started out with a LogZillian gearing up in a T-Rex costume and giving free spinner cards out to the guests waiting to get inside the show. If you’ve never put on an 8 foot tall costume and wandered among the crowd, I highly recommend it.

You know, a funny thing happens when people realize that you’re not there to destroy their city and smash their cars…they want to get a picture with you!

I was able to hand out over 100 cards in just a few minutes for them to get the free spinners, then all I had to do was walk around. I almost wish Cisco didn’t have music playing in the open areas, because, you know, I had to boogie down! Bucket list…check!

Cisco has a game in the main area where you can race someone else by running in place on a platform. Why do all trade show people want to pick on poor old LogZilla? Challenge accepted! You’ll be happy to know that LogZilla kicked butt. Of course I almost hyperventilated, and the suit got really hot, but we won! 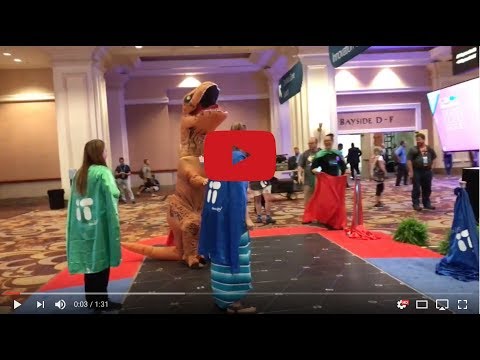 Our booth traffic is a steady stream of visitors looking for spinners and we took every opportunity to demo how awesome our NetOps Platform is. There was a lot of interest from Utility, Education, Transportation, Enterprise, and Service Providers today. They either collected and stored their network and systems data to disk without using it proactively, or were using something they couldn’t get value from easily.

The world wants scalability without giving up simplicity. NetOps shouldn’t be more complex than the networks it manages!

The feedback we’ve received this week has really reinforced the value we provide and the fact that people will stop by for a gift and stick around because what we showed them was truly eye opening for them. It’s a a real testament to the need for us in this market space to see just how amazed they were with the LogZilla NetOps Platform. Being at CiscoLive! has been an amazingly positive experience for the team here and I know we’ve made an impact on a lot of future customers, partners, and other vendors.

CiscoLive! booked Bruno Mars for a private concert as a show of appreciation to their attendees. Yeah, BRUNO FREAKING MARS performed last night for us at T-Mobile arena. We had a blast and got to see how a bunch of network super heroes let loose after work. Having free food and beer was pretty cool as well, but LogZilla T-Rex doesn’t imbibe alcohol. I mean, have you ever seen a drunk T-Rex? Not good… ;)

One take away I have about CiscoLive! is; what an amazing job Cisco has done managing all of this. Kudos and THANK YOU!

If you’re at CiscoLive! this week, stop by the Solutions Showcase Booth T14 (next to the Brew House) and ask to speak to the guy that was wearing the dinosaur suit. I’ll give you a free spinner and show you a NetOps platform that will blow your mind.

LogZilla is built by NetOps, for NetOps.

Did you miss our last webinar?